Chlorine Pool Pros & Cons (Should You Get One?)

HomeBuild a PoolChlorine Pool Pros & Cons (Should You Get One?) 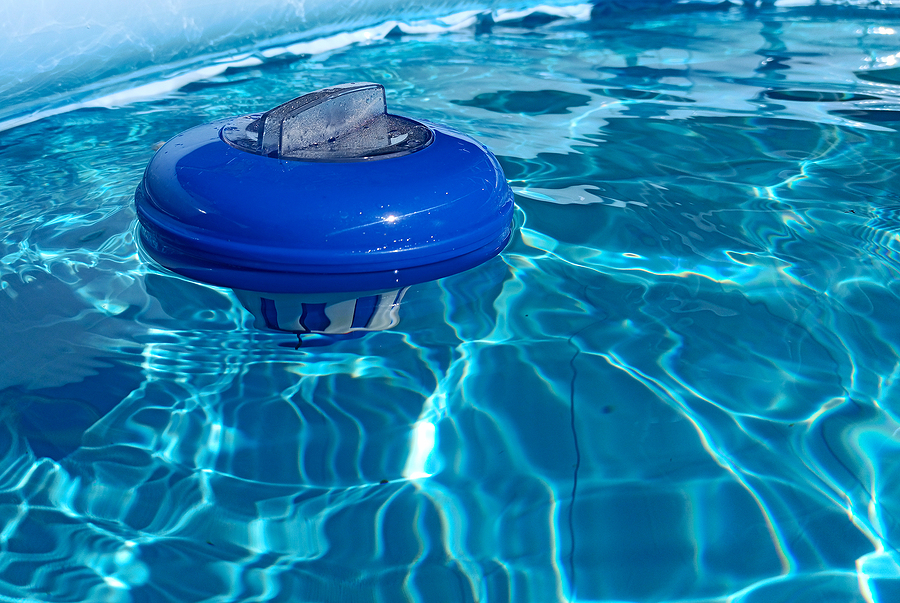 Many people settle for chlorine pools rather than choosing them as their preferred sanitation system. We believe this common attitude is born from a fundamental misunderstanding of the true benefits of a chlorine pool.

Advantages of a Chlorine Pool

PH Is Easier to Balance

There are three conditions that determine how much of a calcium scaling issue you will have in your pool: water hardness, heat, and pH. The third one, pH, is the relevant factor for this discussion, but we want to at least touch on the other two.

Water hardness is the measurement of the mineral content in the water. This measurement is how we approximate the water’s calcium content. If the water hardness is high, there is probably a lot of calcium within it. If that’s the case, there will be more calcium scaling issues in the pool area.

Heat encourages the calcium in the water to crystalize. That’s why calcium scales are most prominent around heating elements and chlorine generators.

Since a chlorine pool’s sanitation is accomplished through human effort, the owner will not need to invest thousands of dollars to install new equipment.

Disadvantages of a Chlorine Pool

Chlorine is used in each of the pool types regardless of the implemented sanitation system. That said, in chlorine pools, you will find a significant amount of chlorine. As chlorine levels increase, so does its toxicity. Fortunately, you rarely hear stories of any truly dangerous outcomes since chlorine evaporates so quickly.

Chlorine Can Dye, Dry, and Damage Your Hair and Skin

Whether blonde, brunette, dyed, or natural, you are at risk of tinting your hair with an ugly green. The color can work for some people, but we’re guessing the majority of you would not be pleased. To be fair, chlorine isn’t completely to blame. It is actually the merging of chlorine and copper molecules that form copper chloride dihydrate. This newly formed compound molecule is a blue-greenish color, and that is what stains your hair green.

Unfortunately, this doesn’t stop with a bad dye job. Your hair is normally protected by a greasy substance known as sebum. Sebum is secreted by the sebaceous gland to keep your hair and skin from drying. It is also a defense mechanism that prevents infections from the uncountable bacteria and viruses that we encounter on a daily basis

Chlorine does what it does best and binds to molecules. In the case of the human body, it binds and removes the sebum that coats hair and skin. This leaves the human body a bit less protected and with noticeably more dried-out skin and hair. There are ways to counteract this effect of chlorine, but we don’t want to delve too deeply into this subject. We have already discussed this topic ad nauseam in the article “How to Protect Hair from Chlorine.” We will just refer you to that article if you would like to know more.

This one might surprise you because there are some very persistent rumors going around about saltwater. It turns out that chlorine and the cyanuric acid that stabilizes it are both much more significant sources of corrosion than saltwater.

We realize that salt water has a bad reputation for corroding everything that it touches. If someone started looking at rust-ridden beach towns, they would certainly find evidence that points in that direction. While saltwater does corrode, it corrodes at a slower rate than many appear to believe. Additionally, most of that rust can be attributed to galvanic corrosion which has more to do with bad metal pairings and improper electrical conduction than salt.

As long as your pool has been properly bonded and grounded, hypochlorous acid and cyanuric acid are the likely culprits causing corrosion. Hypochlorous acid forms whenever chlorine is introduced to water. Cyanuric acid is added to keep chlorine from evaporating. Both of them are vital to the health of a pool, but they will eat away at the metals and fabrics within their reach. These sources of corrosion will become much worse if the pH levels drop too low.

The smell of a chlorine pool can be nostalgic for some and unpleasant for others. Because the appreciation of the “pool smell” is so subjective, this might not actually be a disadvantage.

Chlorines are formed when chlorine binds to pool contaminants. Most commonly, the contaminants will be bacteria and ammonia from sweat and urine. That’s why it’s so important to take a shower immediately before entering the pool. It drastically reduces the chloramines which also reduces the smell.

Chloramines are considered chemical irritants, and they can cause some trouble for your eyes and lungs. For most people, this honestly won’t be much of an issue, but these reactions will be most common in chlorine pools. Chloramines are just more likely to develop in pools with chlorine sanitation systems because chlorine is a precursor to chloramines. At the end of the day, any of the available sanitation systems can provoke these physical reactions.

This is one of the more obvious downsides, but it’s actually not a huge problem. Chlorine will immediately begin to bleach whatever clothing it touches. Fortunately, the bleach is so diluted that won’t usually make a huge impact on the clothing. That said, it will become more noticeable if you swim a lot. Repeated applications of chlorine, even diluted chlorine, will fade whatever clothing it touches. Chlorine pools have higher levels of chlorine, so this will progress faster. If it becomes a problem for you, it might be worth investing in some swimming outfits that are made from bleach-resistant fabrics.

If Salt Is Only Marginally Corrosive, Why Are Beach Towns So Corroded?

Most of the corrosion attributed to salt is actually an electrical problem. When salt is added to water, this creates an electrolyte solution. The salt breaks down into both positive and negative ions that act as transportation for electrons. If your pool has not been electrically bonded and grounded, it will create a vulnerability to a process called galvanic corrosion. Galvanic corrosion is a form of oxidation that essentially means that electrons are stolen from your metals. As those electrons are stolen, you will notice rusted surfaces.

Salt isn’t at fault for this corrosion. The differences in the electromagnetic potential of the metals. If the gap between these metals is bridged with the electrolyte solution, those differences will cause oxidation.

What Should the Chlorine Level Be?

The short answer is that Chlorine levels should be between 1 and 4 parts per million. If you want to know how much chlorine you will need to add to your pool, we will need to take your pool’s measurements into account. We have a series of pool chemical calculators that you mind find useful. If this information interests you, we suggest that you click over to our Chlorine Calculator.

Are Pool Chlorine and Bleach the Same?

They are similar, but they are not the same. If you want to know if you can use either one in your pool, the answer is yes, you can. However, there are some things that you should know first. While both of these products contain chlorine, the amount of chlorine that they contain is substantially different.

The bleach manufactured for clothing can be used in a pool, but you will want to stick to the unscented varieties. We don’t know what unhealthy chemicals might be in the scented bleach products, so we cannot recommend them.

You will save money with the unscented bleach, but you will need to add a lot of it. Bleach contains a relatively small amount of calcium hypochlorite; typically around 5 or 6 percent. You will need a lot more of it to achieve the same impact as pool chlorine. Even though you need a lot more bleach to achieve the same results as pool chlorine, bleach will be the cheaper option.

Is Chlorine Safe for Pregnancy?

Yes, chlorine pools are considered safe for pregnant women. In fact, pregnant women are actively encouraged to swim because it is a super healthy low-impact activity. Muscles are strengthened, back pain can improve, and the time in labor can be reduced.

Of course, there can be complications that prevent pregnant women from swimming, but it is extremely unlikely to have anything to do with the pool’s chlorine. If there are chlorine-specific complications, it will probably be from some mild reactions due to allergies, chloramines, or chlorine removing sebum from the skin.

Is Chlorine Pool Safe for Dogs?

Yes, if a pool’s chlorine content stays within the 1 – 4 parts per million range, it should be safe for your dogs. Even though it is considered safe, you should take precautions with your precious pups. Like humans, dogs can have mild reactions to chlorine. It’s a good idea to rinse them off after they’ve finished with their pool time.

One quick word of warning – A pool, in its chemically balanced state, is safe, but there are some chlorine-related situations that can be dangerous.

You must keep your dogs away from a pool when performing a pool shock. The chlorine goes way above levels that are considered healthy. Additionally, you should store chlorine in a dry and secure location. It needs to be out of reach of any curious dogs.

Yes, chemically balanced chlorine pools are considered safe. There are certain situations pertaining to a pool that can be quite dangerous. However, if we are talking about a pool with the recommended levels of chemicals, the chlorine in the pool shouldn’t present any serious dangers.

Can a chlorine pool be changed to saltwater?

Can a Chlorine Pool Make You Sick?

Yes, it can. However, if you get sick, it won’t be from the water. Chlorine will attach to viruses, distort their proteins, and eliminate them. However, this is far from a perfect system. If you enter a pool, you might just pick up something sickening. In the chart below, we have listed what CDC states are the most common illnesses that swimmers come across. This is chart is pulled almost word-for-word from a webpage on the CDC website. There is additional information on the CDC page. If you want or need to know more, we recommend clicking on the following link.

Can a Chlorine Pool Kill Lice?

We aren’t going to say it’s impossible, but lice are highly unlikely to die quickly in those conditions. They can survive underwater for hours and they are very clingy. It’s not an effective method for removing lice. 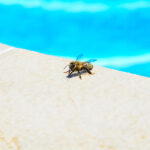 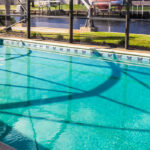